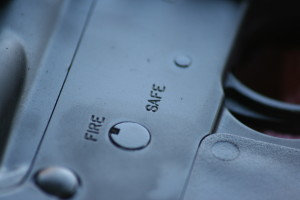 I rolled over for what felt like the millionth time, hoping a change in my position would help the pit in my stomach dissipate. There was something I knew I needed to do, but the thought of actually doing it made my anxiety level skyrocket.

I needed to ask a friend a question—an incredibly important question. But I was scared.

I’ve known this friend for years, and our boys became best buds when they ended up in the same kindergarten class back in September. I didn’t want to risk messing up a good thing.

My gut eventually got the best of me. With summer vacation underway, I knew my son would be at this family’s home fairly regularly. I couldn’t spend the next couple months wrestling with what ifs. So I sat up, grabbed my phone, and spent about 30 minutes composing a 100-word, hand-wringing email. The subject line even read “Awkward question.” I hit the send button, took some deep breaths, and eventually drifted off to sleep.

According to the Pew Research Center, 37 percent of Americans say they or someone in their household owns a gun. Going off of that information, it’s reasonable for me to assume that a sizable number of people in my life are gun-owners. My friends owning guns doesn’t have a huge impact on me personally, but things change when you bring my kid into the mix.

As my son gets older, his play dates are less about him and his friends orbiting whatever parents are in attendance and more about them scampering off to do whatever it is six-year-old boys do. We’re also shifting into the phase where drop-off play dates are the norm. And while I celebrate my son’s growing independence, it brings with it a whole new set of unknowns to consider and conversations to be had.

When moms and dads make plans to drop our kids off for play dates or with a babysitter, we tend to run through an extensive list of topics. We communicate about food and environmental allergies; screen-time preferences and limits; even poop schedules, for Pete’s sake.

You know what we don’t talk about? Guns.

I know why, of course. It’s politically-charged and divisive issue for many people, and who wants to get into such heavy stuff when you’re just trying to give your kid some LEGO time with the neighbor down the street?

But what if we shifted the tone of the conversation? When it comes to our kids, let’s make the presence of guns in the home a parenting topic, rather than a political one. Let’s add it to the list of things we talk about with the people we trust to care for our children.

If you don’t already know if there are guns in the houses where your kids hang out, bite the bullet (sorry, pun totally unavoidable) and ask the question.

Then be prepared for the answer.

If there are guns, talk about where the parents keep them and how they’re secured. From there you can decide if you’re comfortable sending your child to their home. Or maybe that ‘yes’ is a deal-breaker for you, regardless of the precautions those parents take. Where you go from there with the playtime relationship is up to you—your kid, your call—but I urge you to proceed with compassion and without judgement.

Broaching the subject probably will feel uncomfortable, especially the first time you do it. But consider this: according to the American Academy of Pediatrics, every day about seven children are killed in the United States by firearms. I imagine that even the staunchest of gun rights supporters would like to see that number go down.

I didn’t have to wait long for answer after asking my friend if she kept guns in her home. The next morning I woke up to find her reply already sitting in my inbox. With her permission, I’ve included part of her email below. You’ll probably notice that I didn’t share her answer to my question. I didn’t because her stance on guns isn’t relevant here, in my opinion. What matters is what she offered in her response.

“You are a good mom for asking…Glad to always be open with you. Thanks for taking the risk.”

May we all welcome tough questions with such kindness and encouragement. And may we all ask tough questions the same way. Can you imagine the honesty and openness this will foster in your relationships with the people making up your child’s “village”? So let’s embrace the awkwardness that comes with conversations about guns and our kids—acknowledge it and push through. Ask questions. Keep the dialogue going. Even if it feels hard. Because it feels hard. I think all parents would agree that, when it comes to our kids, the things that feel hard are usually the most important.