You see, somehow my baby has turned into a kid.

I’m sure it was a gradual change, but it’s hit me very suddenly. It feels like I put him to bed one night as a chubby, babbling toddler, and he woke up the next morning as a lanky dude who has formed thoughts and opinions on life and the world around him.

Our pants often get mixed up when laundry is folded and put away.

He gets super annoyed when I smell his head.*

My book suggestions are often met with a subtle eye roll.

He only calls me “Mama” at home.

(That last one stings, man.)

When I talk to people about missing my son’s babyhood, they usually respond with some variation of “Ooooh, time for another one!”

No. It’s not time for another one. As I’ve shared before, most likely it will never be time for another one in our house. I don’t want a baby. I want my baby—the baby my seven-year-old son once was. He was, in my opinion, the cutest, sweetest baby to ever be a baby in the history of babies.** 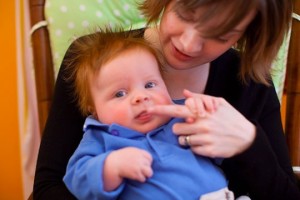 Come on! I cannot even, as the kids say.

While being the mother of a kid definitely has its perks, I can’t say I’m entirely down with this whole growing up thing my son keeps doing. I know I need to get there eventually, but in order to do that I think it’s important to allow myself a mourning period. I watch old videos. I flip through his baby book. I scroll back through years of Instagram and Facebook posts. I text my husband baby pictures with a string of cry-face emojis.

But mostly I just remember things…

How he got the hiccups all the time in utero.

How he’d thrash around like crazy in my belly any time my friend Tess was around.

How so many nurses came by to visit us after word got around the hospital about “this tiny woman giving birth to a 10-pound, 2-ounce baby.”

How I called my mother-in-law from the hospital to ask her to pick up some non-newborn clothes to dress him in.

How he wouldn’t take a bottle if I was in the same building as him.

How he hated nothing more than having his arms swaddled.

How he just wanted to shout from 7 to 11 every night, no matter what we did.

How he sounded like a goat the first few weeks of his life.

How tapping his upper lip would always get those first smiles out of him.

How his dad’s rendition of Lionel Richie’s “All Night Long” rarely failed to comfort him.

How I cried the first time he laughed.

How he cried the first time he bit me while nursing.***

How his red hair and blue eyes made old ladies in Target lose their damn minds.

How he called bananas “mee-mees” for the longest time, and we threatened anyone who tried to correct him.

How sometimes only a nap on top of Mama would do…

There’s so much more—more than any of you probably have the time (or desire) to read. A mother’s heart holds so much, doesn’t it? As my son grows older, it’s like I can feel mine expanding to make sure there’s enough room for who he was and who he’s becoming. For my history and his history and whatever life has in store for us during our time together as mother and son.

Maybe that why my chest hurts so much these days.

*It smells like maple syrup and always has.
**Now he’s the cutest, sweetest kid to ever be a kid in the history of kids—when he’s not being a total stinker.
***I yelped really loudly. I couldn’t help it!