A week ago Saturday, my husband, son, and I came home to something no family ever wants to see:

The window to our backdoor smashed in.
Couch cushions tossed around the living room.
Bags dumped out on the floor.
Every cabinet, drawer, and closet open and ransacked.

While we were at a baseball game that evening, someone–three someones, we came to find out–broke into our house and turned it upside down. They took off with my laptop; three iPads; an old XBox; headphones; every Apple product charger they could find; our spare car key; and eight dollars in change. Oh, and they carried it all away in my son’s backpack and an old messenger bag my husband bought while we were still in college.

We’ve had a strange week, to say the least: cleaning the house top to bottom, phone calls with the police, emails to the insurance company, constantly questioning if we misplaced whatever it is we’re looking for at the moment or if it was actually stolen.

The best way to describe my current state is “unsettled.” While I’m beyond grateful that my family wasn’t home when the break-in happened, it’s hard to forget that three complete strangers stormed through every room of our home, not only touching our things, but brazenly tearing through them and taking what they felt like.

“Violated” is an appropriate word, too, I suppose.

But we’re doing OK. Slowly but surely we’re finding our footing, each in our own way.

My husband is researching security systems, pulling together documentation for our insurance claim, and asking how I’m doing more often than usual.

I cried a lot at first. Now when new items come up missing, I swear under my breath; it just feels more constructive. I’ve also been filling the house with cuttings from our garden. I don’t know why this helps, but I’m going with it. Mostly, though, I’m not really sure what to think or do.

But our seven-year-old? He’s been a total champ.

When I choked out the words “Someone broke into our house” to my husband and son as they came up behind me onto our front porch that night, I was mostly scared of how our little boy would react. He cried, of course, but only about one thing: Bunn-Bunn, the “cuddle friend” he’s had since we brought him home from the hospital. 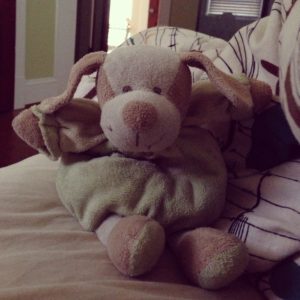 Not about his Nintendo DS. Not about his iPad where he’s devoted hours to crafting complex Minecraft worlds. Not about his LEGO creations smashed all over the living room floor. The only thing he cared about was a grubby, thread-bare stuffed dog.*

When the police finally cleared us to go inside and get a closer look at the damage, they were kind enough to take our son right upstairs to his room, which was as much of a disaster as the rest of the house.

He didn’t seem to notice the opened drawers or the clothes all over the floor. His eyes locked immediately on his bed and he started weeping–yes, weeping–with joy.

“He’s here! They didn’t take him!” he sobbed, hurling himself into my arms.

I’ve been following his lead since then.

I’ve done the same thing every night since. And each night, as he settles into the curve of my arm, I feel myself–my heart–settling, too.