If you’ve been on TikTok recently, you have probably heard about Lucky Girl Syndrome.

The concept is this: by saying that you are always lucky, or that everything always works out for you, things will start always working out for you. In other words, you manifest the good luck in your life. 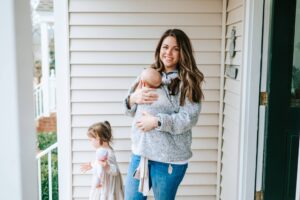 Now, I’m new to the manifestation world, so for a lot of my life I dismissed these ideas as coincidence or seeing what you want to see.

And I guess I adopted that stance, because I never really got into manifestations when they became more mainstream and trendy several years ago.

But then Lucky Girl Syndrome hit the scene, and I couldn’t deny it anymore. Because I realized, maybe I had actually been manifesting for years.

Did I know it was called Lucky Girl Syndrome? No. But since high school (which was just a few…15 years ago…) I have won a lot of things. It kind of became a joke—Emily is going to win that. And I’m not sure which came first, me winning, or me saying that I’m lucky, but it became a sort of catchphrase for me.

Even into motherhood, I found myself winning diaper raffles and giveaways. I even won not one, but TWO newborn photoshoots from popular photographers through an Instagram giveaway.

Or it’s a coincidence.

Or it really is the magic of the Lucky Girl Syndrome.

Truthfully, I think you can believe whatever you want to here and it is fine, and you would be right. (Because really, who can say?)

But, this is my defense for Lucky Girl Syndrome:

In one of my favorite books to teach to high schoolers, The Alchemist, the main character learns that the universe is conspiring to get him to his desires. And what a lovely sentiment to learn.

But what a nice counter idea, that along with those struggles, maybe the universe is STILL conspiring to bring you goodness, and wonder, and joy.

This is just one mom’s take on a mindset that has helped me believe the world is not out to get me. That, in fact, the world wants me to shine.

So if you come across a Lucky Girl syndrome TikTok this week, maybe consider giving this mindset a try.