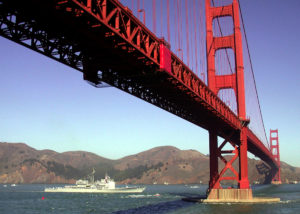 When I was very young, I heard that when workers finished painting the Golden Gate Bridge it was time to begin painting it again–that it was a never-ending task. That fact boggled my mind. I remember having a hard time wrapping my brain around the idea that there was no actual completion of the job; it went on forever. And then I became a parent, and over the years of mothering and the multiple children I added to the family, I realized I was in the continual process of painting the Golden Gate Bridge.

I remember all the times I would just finish changing a diaper and, sure enough, I would immediately need to change it again because of a major blow-out. The times I finished nursing a baby who fell asleep in my arms and as soon as I tried to lay her down, she woke up and starting nursing again, pulling back into what felt like an endless cycle.
The meals–the innumerable meals–I would prepare and clean up after, only to have to do it again a few hours later and again the next day and the next day. Three loads of laundry a day, folded, put away…and then three loads again the next day…and every day. And then there were all the questions and answers, so often the same ones over and over again.
The naming of the jobs of parenting is never-ending in itself, and at the beginning of my journey it was the sheer relentlessness of mothering that made me wonder how I would survive. Isn’t that the definition of insanity? Doing the same thing over and over again and expecting different results?

So how do you not go insane? Acceptance. Acceptance that it is going to be this way and you might as well wrap your (tired, fatigued) mind around it. Early on in my mothering career I had a moment with the laundry. I hated laundry. One time I was so far behind, it was piled so high that going to the laundromat seemed the only solution, which of course made me hate it even more. I remember suddenly having an epiphany: I was going to be doing laundry for a very long time and I needed to change my mind about it. I needed to change my relationship with it. And so, at that moment I decided to like laundry. I decided that doing laundry each day, even if it were three times a day, would be enjoyable; it would be an accomplishment, a finished product every day. I would complete this task for the moment and not think about the next time and all the times after that. I would practice Zen-laundry. And you know what? It worked. It worked for laundry and then I found it worked for so many of the other mundane, repetitive actions I was required to do. I quit arguing with reality, I surrendered to the reality, and I began to see so many of the things I did as a finished product. It was liberating.

And though I was still painting the equivalent of the Golden Gate Bridge, I was now able to see the beauty of the painting and the view from the tall vistas on the bridge that often took my breath away. The views were of my children, their innocence, and their complete and rightful ignorance of the tasks.