My favorite words on parenting

As you probably gathered from my presence on this blog, I’m a writer. And although this is the year 2015, I’m one of those rare writers who still writes first drafts with pen and paper. For me, making letters with my fingers is the most efficient way to pull thoughts out of my brain. From there I can “smash them, crash them”* into something coherent, constructive, and fit to be sent out into the world. It’s just part of my writing process 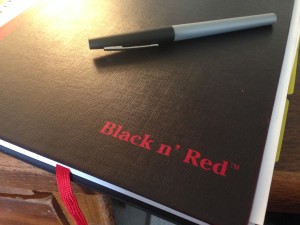 Most of my drafts start out in a hardcover Black n’ Red notebook which functions as my life catch-all. In addition to my scribbled thoughts, it’s filled with to-do lists; bits and pieces of my son’s artwork; some prayers; and sweet notes from friends. I’ve also got an entire section devoted to quotes—because that’s another part of my writing process: reminding myself that no matter how jumbly-bumbly my thoughts are, there are people out in the world who can really write the shit out of a thing.**

Due to my current station in life as the mother of young child, much of my writing is about parenting. Consequently, many of the quotes that catch my eye these days are about this work of mothering—of helping a little boy become a kind citizen of this world. Their impact is two-fold for me. First, and most practically, they often help me get my own words out of my head an onto the page. Second, and probably more importantly, they help me get myself through the day.

To find another’s words that capture how you feel about parenthood—or how you didn’t even realize you feel or how you wish you’d feel—is life-giving. It reminds us that we’re not alone in this task and the range of emotions that come with it. Below you’ll find a selection of some of my favorite quotes about parenting and parenthood, children and childhood, and just what it means to be so connected to another being on this planet. Some are whip-smart, some are funny, some are heart-breaking, but every single one is pulled from that notebook pictured right up there.*** Each one has helped me in some way. I hope they do the same for you.

“We all come into existence as a single cell, smaller than a speck of dust. Much smaller. Divide. Multiply. Add and subtract. Matter changes hands, atoms flow in and out, molecules pivot, proteins stitch together, mitochondria send out their oxidative dictates; we begin as a microscopic electrical swarm. The lungs the brain the heart. Forty weeks later, six trillion cells get crushed in the vise of our mother’s birth canal and we howl. Then the world starts in on us.” -Anthony Doer, All the Light We Cannot See

“A baby is God’s opinion that life should go on.” -Carl Sandburg, Remembrance Rock

“What did my fingers do before they held him?
What did my heart do, with its love?”
-Sylvia Plath, “Three Women”

“I took her into bed with me and propped myself up with pillows against the headboard to let her nurse. As she nursed and the milk came, she began a little low contented sort of singing. I would feel milk and love flowing from me to her as once it had flowed to me. It emptied me. As the baby fed, I seemed slowly to grow empty of myself, as if in the presence of that long flow of love even grief could not stand.” -Wendell Berry, Hannah Coulter

“They came to her, naturally, since she was a woman, all day long with this and that; one wanting this, another that; the children were growing up; she often felt she was nothing but a sponge sopped full of human emotions.” -Virginia Woolf, To the Lighthouse

“You are the bows from which your children as living arrows are sent forth.
The archer sees the mark upon the path of the infinite,
And He bends you with His might that His arrows may go swift and far.
Let your bending in the archer’s hand be for gladness;
For even as He loves the arrow that flies,
So He loves also the bow that is stable.”
-Kahlil Gibran, The Prophet

“You know, schizoid behavior is a pretty common thing in children. It’s accepted, because all we adults have this unspoken agreement that children are lunatics.” -Stephen King, The Shining

“It’s hard having kids because it’s boring… It’s just being with them on the floor while they be children. They read Clifford the Big Red Dog to you at a rate of 50 minutes a page, and you have to sit there and be horribly proud and bored at the same time.” -Louis C.K.

“A child needs your love most when he deserves it least.” -Erma Bombeck

“It’s so awful, attacking your child. It’s the worse thing I know, to shout loudly at this 50 lb. being with his huge trusting brown eyes. It’s like bitch-slapping E.T.” -Anne Lamott, Traveling Mercies: Some Thoughts on Faith

“It kills you to see them grow up. But I guess it would kill you quicker if they didn’t.” -Barbara Kingsolver, Animal Dreams

“‘It’s come at last’, she thought, ‘the time when you can no longer stand between your children and heartache.'” -Betty Smith, A Tree Grows in Brooklyn

“A self is not something static, tied up in a pretty parcel and handed to the child, finished and complete. A self is always becoming.” -Madeleine L’Engle, Circle of Quiet

“I knew when I met you an adventure was going to happen.” -A.A. Milne

*This phrase comes from “Parting”, a poem written by Madame Kuan and translated, believe it or not, Bruce Lee.
**Pro-tip: If you ever find yourself with writer’s block, read everything you can get your hands on—good and bad. Good work will inspire you to do good work of your own. Bad work will inspire you to do a better job than that person did.
***I happened upon some of these quotes in my own reading life, while others were found in more random places. I’ve included book titles if I have them.