A tale of sushi, stubbornness, and questionable parenting

One recent Saturday evening, I found myself sitting in a restaurant with my husband and son. About an hour earlier, after realizing neither of us could muster the energy to fix a meal, my husband and I made the rare decision to go out to dinner as a family.

(It’s not that we don’t enjoy going out to dinner or that our son doesn’t know how to behave in public. We do and he does. But budgets are there for a reason, and life is busy, so family outings to restaurants are few and far between these days.)

We opted for a local Pan-Asian restaurant that offers sushi, makizushi, noodle dishes, and sandwiches—all served alongside giant buckets of tater tots. Because tater tots are always a fantastic idea no matter what “genre” of food is being served.

My husband and I usually save this spot for outings with friends, but we decided to give it a go with our almost-seven-year-old. He’s recently gotten more adventurous in trying new-to-him foods, so why not use this family dinner to put his more mature taste buds to the test? I mean, the kid eats tomatoes right off of the vine! He requests carrots and cucumbers on the regular. What could possibly go wrong? 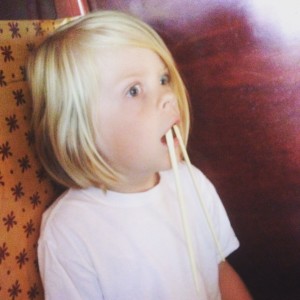 Our son was in good spirits as he settled into his seat. I taught him how to make a walrus face using chopsticks (an essential life skill) and helped him color in his paper place mat as my husband ordered: a bucket of tater tots for the table; a wasabi pea and scallion roll for me; some sort of mushroom and tofu roll for him; and a tempura-fried sweet potato roll for the kid.

“It’s sweet potato! Fried, even! He’ll like it,” my husband said with such hope in his eyes.

Our server soon brought the bucket of tater tots to the table (yes, it’s a literal metal bucket) much to our son’s delight. He was all smiles and “yums” as we worked our way to the bottom…until our main dishes arrived.

He eyed the rolls—each filled with rice and vegetables and (gasp!) seaweed—and actually cowered in the corner of the booth.

My husband calmly described each item on the platter and asked our son to give the sweet potato roll a try.

“No,” our son said. A look of panic spread across his face.

We tried to stay breezy about it. If he didn’t want to eat it, fine. More for us, right?

But as we watched our son shove tater tots into his face and ignore the perfectly delicious entree sitting on in front of him, my husband and I locked eyes across the table. We found ourselves making an unspoken pact. The kid was going to eat that roll.

First we tried the oldest trick in the parenting book: empty threats.

Lather, rinse, repeat about 15 times, none of which involved him taking a bite or us leaving. Right or wrong, I struggle with disciplinary follow-through when presented with a chance to consume a meal that I didn’t have to plan, prepare, or clean up.*

“If you eat a piece, you can have ice cream when you get home,” my husband cooed.

I was pretty sure this technique would prove successful; even though bribery gets a bad rap, it usually works. But all it did was kick the drama into high gear. Let’s just say you haven’t seen anguish until you’ve witnessed a child faced with a choice like that.

He whined.
He climbed into my lap.
He buried his face in my shoulder.
He cranked the waterworks on full blast.

“Fine,” my husband said, shaking his head. “You don’t have to eat it. But no ice cream at home and no more tater tots.”

The man was done—and rightfully so.

I, however, was not. For me, it was no longer about the damn sushi.

I peeled my son’s arms off my neck, set him down next to me, and held his hands in mine. I looked him in the eye and smiled.

“Baby, I want you to listen very carefully,” I said gently. “You don’t have to eat the sweet potato roll if you don’t want to. Do you understand?”

He took a deep, shaky breath and nodded.

“But if you don’t eat it, you can’t have tater tots or dessert, just like Daddy said. Do you understand?”

“And when we get home, Daddy and I are going to eat ice cream…and you have to watch.”

That kid grabbed a piece of that sushi roll and shoved it in his mouth faster than you could say “questionable parenting techniques.”

He gagged and sputtered, willing himself to finish the one required piece. But…he did it. Once he forced it down—chasing it with gulps of water and a handful of tater tots—he was back in my lap, this time bouncing with excitement over his bravery.

As soon as I issued that ultimatum, I knew I was pushing it. But if it backfired and we had to follow through on the unconventional (some might say “mean”) consequences I issued, so be it. Better to push on something as minor as dinner and encourage our son to take a risk than to let him stay in his comfort zone and miss out on some really fun stuff. Like tater tots and ice cream.

*Unless he’s losing his mind and disturbing other diners, obviously. I’m not a complete jerk.