Our six-year-old son is sort of known for his hair. Even before he was born, it’s gotten him attention. I had an ultrasound when I was 35 weeks pregnant with him, and I distinctly remember the doctor chuckling as soon as the kid’s image popped up on the screen.

“That…that is a lot of hair,” he said, shaking his head.

Turns out, the doctor was right. When our son arrived five weeks and five days later, his giant head was covered with hair. Not baby fuzz. Hair. Light brown hair that, once washed, spiked out in all directions and looked as if we’d had his tips frosted when he was in the womb. Upon further inspection, I found that under those porcupinesque locks hid an entire additional layer of hair–all baby fine and as white as could be.

Everyone told me his hair would fall out, leaving him sort of towheaded/sort of bald. But it didn’t. In fact, it stayed put and turned red, probably just to stick it to those naysayers. 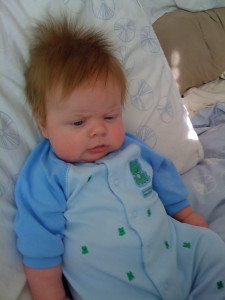 His first haircut happened before his first birthday. We got it trimmed pretty regularly every couple months after that until, at about age two-and-a-half, he decided haircuts were akin to someone skinning him alive. Since then, I’ve managed to wrangle him into a stylist’s chair about once a year–maybe twice if I can come up with a sufficient bribe.

As you’d expect, our son’s moratorium on haircuts has left him with longer-than-average locks. The red is mostly gone; he’s now sporting golden hair with light blonde highlights. As of this writing, his hair hits just below his jaw, all full of swoopy layers. He loves it. His father and I love it. Most people we know love it, too. Basically the kid has the kind of hair women pay lots and lots of money to have.

And that, my friends, is the rub in some ways. It’s not uncommon for our little boy to get mistaken for a little girl.

People see long hair and assume (right or wrong) that he’s female and refer to him as “her”, “she”, and on really special occasions, “princess.” For a long time, he seemed completely oblivious to these reactions–either he was too young to grok what was going on or he honestly figured those people must’ve been talking about someone else. And since he didn’t make an issue of it, I didn’t either. Let them think he was a girl, I figured. If it’s a cashier in a grocery store or some random person on the playground that we’ll probably never see again, what did it matter?

But at some point in the last year or so, it started to.

Last fall I took him to a LEGO Fest in our hometown, and before we headed out for the day, he asked to spend some time in the LEGO Friends section–you know, the sets that are “for girls.” He went straight for a display of Cinderella’s castle because, hello, castles are awesome.

As he sidled up next to a bin of bricks, a woman said to her daughter, “Honey, make room so this little girl can play, too.”

A totally honest mistake. She was actually being quite polite–and encouraging her daughter to do the same! But my little boy was mortified. He didn’t say anything, but the look he gave me–equal parts shock and panic–showed me that I needed to.

“Oh, he’s a boy,” I quickly interjected, trying to keep my tone breezy.

“My mistake,” she replied, sheepishly. “I just saw the hair so…”

I smiled, as did she, and that was that. But my son only lasted a few more minutes before he asked if we could go home. He was silent the entire walk back to the car. As I pulled out of the parking lot, I asked him how the lady’s comment about his hair made him feel.

“Because I’m not a girl. I’m a boy. Why do people think my hair makes me a girl?”

I pointed out that lots of boys these days have short hair, lots of girls have long hair, and people are used to what they’re used to. He just looked out the window. After a few moments of dead silence from the backseat, I tried to continue the conversation.

“If you want to cut your hair sh–”

And that was (and still is) that.

It’s been almost a year since that conversation in the car, and our son is holding strong in his long hair stance. He still gets called a girl from time to time, but these days it usually happens when another kid his age is looking to stir the pot. And it doesn’t get to him as much anymore.

One recent afternoon when I picked him up from day camp, he climbed into the car and mentioned that one of the boys in his group kept calling him a girl. 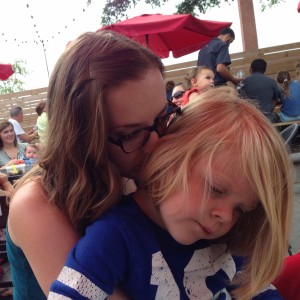 “Why do you think he said that?” I asked.

“Because I have longer hair,” he answered.

“I told him that boys can have long hair, too,” he replied. “And girls are awesome. It’s not bad to be a girl,” he added with a shrug.

It sure is, kid. It’s your hair and it is fantastic.