Our summer of life skills

One hour after my son got home from his last day of kindergarten, I presented him with this piece of paper: 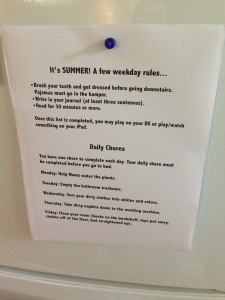 As he’d barely tasted the freedom that comes with the final clang of the school bell, as visions of days spent playing Minecraft danced in his head, I shoved some real-talk right in my son’s sweet-little-angel-baby face.

In case you can’t tell from the photo, here’s what’s printed on that paper currently holding court on our fridge:

Brush your teeth and get dressed before going downstairs.

Pajamas must go in the hamper.

Write in your journal (at least three sentences).

Once this list is completed, you may play on your DS or play/watch something on your iPad.

Daily Chores
You have one chore to complete each day. Your daily chore must be completed before you go to bed.

Monday: Help Mama water the plants.
Tuesday: Empty the bathroom trashcans.
Wednesday: Sort your dirty clothes into whites and colors.
Thursday: Take dirty napkins down to the washing machine.
Friday: Clean your room (books on the bookshelf, toys put away, clothes off the floor, bed straightened up).

To my son’s credit, he didn’t respond to my summertime expectations with too much rending of garments and nashing of teeth. He whined a bit, but once we talked about how this list would make life easier for our family (him included) during and after his two-plus months of relative freedom, he got on board pretty quickly.

Here’s why I went this route…

It maintains a routine.

Nine months out of the year my son is expected to be at a certain place at a certain time and to accomplish certain tasks while he’s there. While I agree that summer break should be exactly that (which is one reason why these rules only apply to weekdays), I would be doing him a disservice if I didn’t help him maintain some semblance of structure over the next several weeks. Journaling and reading time were part of his routine in kindergarten and will be part of his routine again in first grade. Keeping those tasks as part of his daily life will mean one less shock to his system when he heads back to the classroom in September. Added bonus: daily reading and writing lets us all stay on top of his literacy skills, which will hopefully keep him off the “summer slide.”

It encourages time management and independence.

My first draft of this list required our son to complete his daily chore before enjoying any screen time.* I ended up scrapping that version when I realized I didn’t want to spend my summer days acting as his drill sergeant—or any of my days, for that matter. He knows what’s expected of him before he picks up his iPad or makes use of any other glowing device. He also knows what’s expected of him before he turns in for the night. It’s up to him to figure out how to use his time to take care of the “need-to-dos” for the day before moving on to the “want-to-dos.” All that’s required of me is an occasional reminder as to what the day’s chore is and to provide supervision if the task calls for it.

My husband and I both work a lot. He owns and runs his own business, and I work three part-time jobs while also serving as primary caregiver for our son. Meanwhile, the kid is almost seven, literate, and in possession of excellent fine and gross motor skills. There’s no reason why he can’t help lighten the load for his dad and I around the house.

Put simply, the kid needs to start earning his keep.**

I admit that the tasks we’ve given our son aren’t particularly demanding. Honestly, I probably wouldn’t even notice if he never bothered to do some of them. But I believe we’re laying important groundwork for him. Now that he’s older, it’s time for our household to shift away from a solely “we give, he takes” dynamic. What’s more, when he’s out in the world—whether that means school or a job or his future relationships—he’s going to need to carry his weight and contribute to making things “go.” I think getting his toys off the floor and emptying trashcans are good places to start.