Falling out of first place

Last month was kind of weird for our family. Work schedules, after school activities, evening commitments, and multiple bouts of a stomach “situation” left my husband, our son, and me like three ships passing in the night—always two here and one there, just with varying iterations. 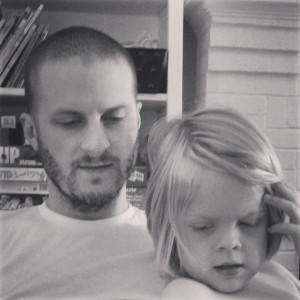 Within that window of time, I wasn’t home or available as often as I usually am. So my husband and son were left to do their “thing” without me. As their “thing” was done, our little boy realized his dad is a kind, fun, and engaged person with whom he shares many interests.

I’ve been trying to convince my son of his father’s very fine qualities since…well…forever, but to no avail. He held tight to his Mama’s Boy* status and, with that, the perspective that Mama (i.e. me) was the only one who could do anything ever at all.

One of his first sentences was “Want Mama do it.” That one was on repeat for a good 18 months, I’d say.

My husband’s attempts to give our son a bath, get him dressed, put him to bed (you know, parent him) were usually greeted with shrieks and/or schlumping to the ground as if the child had no bones—an effective protesting move that would’ve proven significantly more effective if the kid weighed more than 30 pounds at the time.

There was even an incident when we were in the throes of potty training when my son gazed up at me, love brimming from his eyes, and said, “I only poop for you, Mama.”

While his devotion was incredibly sweet, it left my husband feeling a little rejected—and left me feeling a lot exhausted. If I wasn’t doing everything, I was convincing my son to let his father do something…anything. I clung to the anecdotes from mothers of former Mama’s Boys that promised he would have a “Daddy Phase” at some point.

Well, you know that whole “Be careful what you wish for” cliche? It’s a cliche because it’s true.

For the most part, things have gone back to normal in our house—at least when it comes to schedules and our typical breakdown of who does what and when. But since his couple weeks of more concentrated time with his father, my son has abandoned his Mama’s Boy ways and placed himself squarely in Camp Daddy.

He asks “Where’s Daddy?” when I pick him up from school and chirps a looped chorus of “When will Daddy be home?” until my husband walks in the door at 5:30. The news that I’ll be handling bedtime is now met with a heavy sigh. And as I tuck into bed with him to read and sing him to sleep, there’s at least one whimper of “I miss Daddy.”

Sure, his new preference for Dad has its perks. I find myself uttering the phrases “I feel guilty” or “I feel overwhelmed” less and less these days. Not being the default parent for every act inherent to tending to a young child is pretty freeing.

But it also stings like hell. I’m not yet sure what to do with this new space I have. It’s jarring…achy…sometimes really, really sad.

Here’s the thing I’m trying to remember: raising a child is basically a series of hellos and goodbyes. Over time we meet—and then see off—so many variations of these little people we’ve been given to raise. As they change, so do their needs and their preferences for who fulfills those needs. It seems that what our boy needs right now is something he wants his father to give him. And that’s ok. It’s all normal and healthy and good—even if it’s hard.

Who knows? Maybe he’ll swing back to me at some point. Maybe he won’t. But if he does, I’ll be here. Mama will do it.

*I don’t use that phrase pejoratively. There is nothing wrong with a boy loving his mother or a daughter loving her father or whatever parent-child dynamic you have.