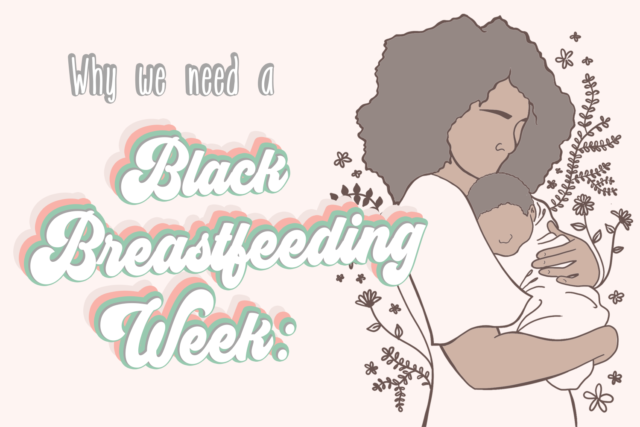 It’s easy to assume that breastfeeding is universally accessible to all mothers, but in reality, this sentiment could not be further from the truth. Although breastfeeding rates in America have continued to rise over the past several decades, when we break down the demographics behind this upward trend, we start to spot some startling inequities.

The consequences of this inequity have resulted in a full-blown healthcare crisis. According to CDC data from 2015, black babies are two times more likely to die before their first birthday than white babies. This information is critical to keep in mind when considering that breastfeeding reduces the risk of SIDS at all stages of infancy by 50%.

So what is driving the palpable inequity behind the lagging black breastfeeding rates? Although these disparities in breastfeeding are a multifaceted and systemic issue that cannot be painted with a broad brush, here are a few explanations provided by medical professionals and black birth workers.

Lack of Diversity in the Lactation Space

Many well-intentioned lactation advocacy groups are often led by white women, which only further perpetuates the assumption that black women don’t breastfeed. Furthermore, without diversifying lactation advocacy groups, there will never be enough culturally competent lactation consultants who are able to fully comprehend the particular barriers that women of color have to overcome to achieve breastfeeding success. Furthermore, by diversifying the lactation field, more communities would be made accessible to such services, which would ultimately lead to an increase in breastfeeding success rates within black and other marginalized communities.

According to research conducted by Nurse Midwife Stephanie Devane-Johnson, generational trauma plays a huge role in the lack of black breastfeeding success. In an interview with Health Connect One, Devane-Johnson discusses the implications of wet-nursing within the black community.

“The echoes of slave women being forced to give up their milk still resounded. And black women didn’t talk to their sisters, daughters, and granddaughters about how to feed their babies; the bottle was just assumed,” Devane-Johnson said. “A lot of slave babies died during slavery because they weren’t breastfed. They were fed concoctions of dirty water and cows milk. Meanwhile, those children’s mothers were giving white children their milk.”

According to Devane-Johnson, the damage done to black women who were forced to wet-nurse white babies is still palpable today, and is often made evident when she browses the web.

“These pictures are all on social media,” Devane-Johnson said. “Then someone gets pregnant, and people talk about breastfeeding. They’ll say, ‘You don’t have to do that anymore.'”

In an interview with NPR, Andrea Freeman, the author of Skimmed: Breastfeeding, Race, and Injustice, discusses how the infant formula industry disproportionately targets black women.

“It has always been true and is still true today that it is almost impossible to find a positive image of a black woman breastfeeding,” Freeman said. “In a magazine, on television, on social media or any source of imagery that tells you who is a good mother.”

The remedy to this harmful, racially-targeted marketing strategy is to enact policies to protect black mothers from corporate interests and start representing black women in the media as the loving, maternal parents that they are.

“We have a through-line throughout history of demonizing black mothers in a way that allows corporations to profit. And these stories are myths and they are political, so I’m saying we need reality,” Freeman said. “We need to show that black mothers are no different from white mothers and every other mother there is. Black mothers are amazing, resilient, they are heroes. The stories that we tell have a direct impact on laws and policies.”

Although maternal and infant mortality affects women of every demographic, black women have been statistically shown to be at a higher risk. According to the CDC, black women are 3.2 times more likely to die during childbirth or from pregnancy-related complications than their white counterparts, which is clearly reflected by data collected between the years 2007-2016.

But why are black women at a higher risk of dying from pregnancy-related complications that affect all women? One argument is that black women often receive lesser-quality prenatal care than white women, are more likely to be uninsured, and aren’t treated with dignity and respect when enduring pain or exhibiting other health concerns. This gap in the quality of care they receive is due to harmful stereotypes that both consciously and subconsciously dictate how medical professionals interpret the mannerisms of black women and gauge the urgency of a medical concern.

It’s clearly reflected in the numbers that there is still much work to be done when it comes to bridging the gaps that perpetuate breastfeeding disparity. However, there are many black birth workers and lactation specialists who have been working tirelessly and continue to trailblaze this movement forward and intact tangible change.

How to offer your support

Here are five black birth workers, advocates, organizations and breastfeeding specialists for you to support now.

Kimberly Seals Allers is an award-winning journalist, author of five books, international speaker, strategist, and advocate for maternal and infant health. You can find her website here.

This organization works to create solutions to optimize black maternal and infant health outcomes through training, advocacy, research, and community-based collaborations. You can find their website here.

Stephanie DeVane-Johnson, Ph.D., is a certified nurse-midwife and assistant professor at the School of Nursing at Duke University. One of her areas of passion and expertise involve decreasing breastfeeding disparity in the Black community by utilizing a cultural and historical lens. You can find some of her studies and webinars here.