The Truth About Sleep Regressions & How to Survive Them 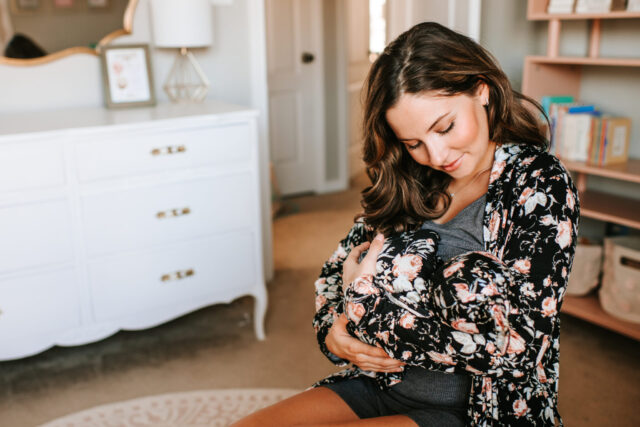 Unfortunately, one very true piece of information out there about baby sleep is that sleep regressions are real, and that they are a doozy.

In simple terms, a sleep regression is when your baby’s sleep pattern noticeably shifts (and usually not for the better). This might look like waking up more during the night, trouble falling back asleep, or fighting going to sleep in the first place. These regressions usually align with the major brain development that happens at 4 months, 8-10 months, 1 year, 18 months, and 2 years.

So the good news is that a sleep regression is totally normal and an awesome sign that your little one is developing. The bad news is that sleep is already a precious commodity as a parent, and a regression means your baby (and as a result you) are getting less of it.

I remember my little guy started sleeping 6-8 hour stretches at 7 weeks old. It was heavenly. We had our bedtime routine down, as well as, our middle-of-the-night diaper change and nursing routine. I remember thinking, “I can survive like this.”

Then, at around 13ish weeks (almost 4 months), things changed. My son would wake up 20, 30, 40 minutes after being put down. I would comfort him and get him back to sleep. Sometimes this process was repeated several times. His longest stretch at night went down to 5ish hours (sometimes less). I was exhausted and so frustrated because it suddenly seemed like everything that had been working so well was not working anymore.

I remember desperately asking a friend, “What do I do?” She gave me some of the best advice I received in new motherhood: “Hold on. This too shall pass. Just when you think you can’t take another minute of it, it’ll even out.”

And it did. It evened out. He slept again. Until he hit another regression. But now at almost 15 months old, my son sleeps great. He goes to sleep at bedtime without screaming, stays asleep, and wakes up 11-12 hours later. It’s great, even if it wasn’t always.

However, the truth is that “just hold on” and “this too shall pass” isn’t the best advice for some people. Some people need some more concrete steps to surviving the dreaded and unavoidable sleep regressions. Here’s what worked for me & others mom I knew:

Sleep regressions are not the time to start mixing things up and staying out late. If anything, shortened naps might mean moving bedtime up.

Try to keep appropriate wake windows during the day.

But I will say, I’ve always found it better to watch my baby for sleepy cues versus a clock for when he “should” be tired.

Babies aren’t afraid of the dark. They respond to light which during this time period can provide just enough stimulation to wake them up or distract them from going to sleep.

Lean into your support system.

Ask for help, for coffee, for a break, for help with the dishes or laundry, whatever you need–ask for it. Sleep regressions might be unavoidable, but they are not meant to be weathered alone.