And Baby Makes 3: How Our Son Changed Our Marriage 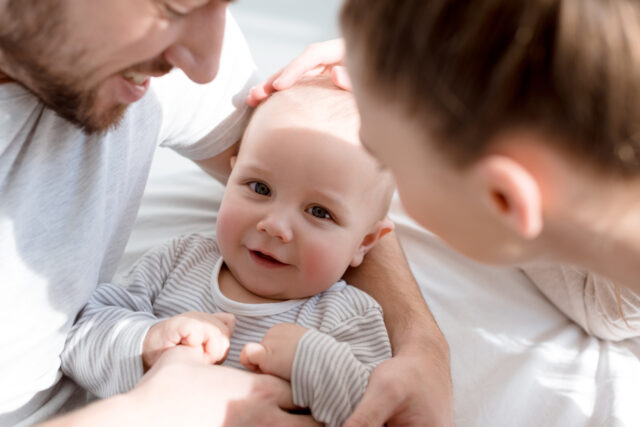 Although, with most things in regards to motherhood, I did not quite grasp how different things would be. Just like I knew I was going to be tired, but I didn’t quite grasp how tired I would be. I truly believe no amount of advice or preparation can prepare you for the massive shift that a new baby brings.

It shifted who I was as a woman, my entire lifestyle, and my relationship with my husband.

We had been married almost a year and a half when I got pregnant, and I was 8 months along when we celebrated our second wedding anniversary. So, we spent some time “just the two of us”–we traveled domestically and abroad. We faced challenges individually and as a couple. We lost a dog. We adopted a dog.

There were some major shifts in our dynamic as a couple that were difficult to ignore:

My husband has always done little things that annoy me (and vice versa). But previously, they were so minor that I almost did not notice them after a while. But after adding a baby, the combination of sleep deprivation and hormone changes made these little annoyances truly fight worthy. Things that I used to be able to brush off became intolerable. I went back and forth between trying to remain calm and exploding. Especially early on, this shift took some careful navigating and definitely led to some tense arguments.

Things never felt “fair” & I was resentful for it

I don’t know if our household duties were equal before our son was born. I think they were pretty close, but suddenly, things were definitely not equal. As a breastfeeding mama, I do most (ahem, all) night wakings/feedings. Cognitively, I understood that he physically could not breastfeed. That didn’t stop me from resenting him and his non-milking-producing pecs. From this, I’ve learned to more clearly communicate what I need, and I feel like my husband has started to do the same.

I’m proud of my body for growing and birthing a human, but I’ve never felt more disconnected from it than I have during this postpartum period. That coupled with exhaustion makes sex tricky. While I would love to have the same intimate relationship with my husband as we used to, it just isn’t the same. Something that used to be very natural for us now requires work, communication, and planning.

Some of our tactics to parenting are different. I’m more uptight about some things, and my husband is more focused on others. It causes friction sometimes (at least on my end). But it has also caused some really honest and vulnerable conversations. My husband doesn’t work on Mondays and takes care of our son while I’m at work. He does some things differently than I would, but our son is always happy and healthy when I get home. That is something I force myself to continually come back to.

I love him differently

I asked my husband how he thought our son had changed our marriage. His thoughtful response was: “I don’t know. Made it better? Cause he’s an awesome baby.”

Honestly, I couldn’t agree with him more. Our kid is pretty awesome, and at the end of the day, our marriage is better because of him.