The Benefits of Baby Wearing

After my son was born, I experienced this strange type of grief. I felt myself grieving that he was no longer so close to me, that he was now living outside my body. It was a little strange because after nine months I thought I was SO ready to not be pregnant anymore. 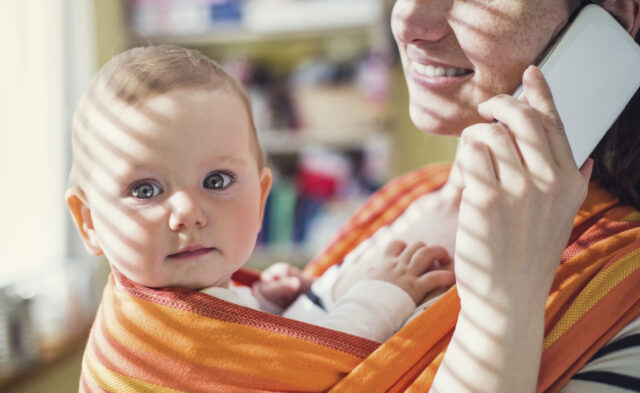 That grief slowly left and was replaced by this deep urge to keep him as close as possible.

Unfortunately, holding a baby 24/7 is not realistic. I needed to eat, go to the bathroom, do things around the house, do tiny bits of work or reading. But I felt like I couldn’t focus unless I had him in my arms. Thankfully, a friend of mine suggested I “wear him.”

It was the best advice I could’ve received at two weeks postpartum. Turns out, there are so many reasons to wrap that baby up.

Helps to Transition Baby From Womb to the World

Just like me, my son struggled with the whole “no longer living the womb” thing. The fourth trimester (the twelve weeks after birth) is a time for little ones to get used to living in the outside world. After spending nine cozy months curled up in warmth, the outside world can be a bit jarring. Wearing your baby provides them with that constant warmth and closeness they are used to.

For whatever reason, people will invade a baby’s space if they are in a car seat. They’ll lean down and talk close to them or even touch them. But when my son was wrapped on my chest, I noticed people were significantly more likely to not get all up in his face. Because if they did, they’d essentially be getting all up in my boobs as that was his favorite place to nuzzle. It added this extra bubble of protections from outside germs.

Soothing & Comforting for Baby (and mama!)

If I was at the house, I would just wear a nursing bra while I wore him. This was an easy way to get that skin-to-skin contact that was so soothing for my little guy. In general, the benefits of skin-to-skin could be a whole other post. But it is so important as it releases hormones in mom that help to ease stress and anxiety.

I won’t say this is my favorite part of babywearing because the constant snuggles is a definite plus. BUT, having the use of two hands is amazing and for me, kind of life-changing. I could cook, do some light cleaning, easily hold and read a book. I suddenly could do all these things without feeling like a part of me was missing. For the first few weeks, that’s what it felt like to not have my baby in my arms–like a physical part of me was missing.

Babywearing helped me so much during the tricky fourth trimester, and I continued wearing my son until he did not want to be worn anymore. By the time 8 months rolled around, he was active and preferred to be able to break free easily and explore.

But I will always hold those days of him wrapped to my chest close to my heart. I’ll always remember the sigh of relief I felt holding him close and the freedom I felt with finally being able to use two hands easily.