My body, our history 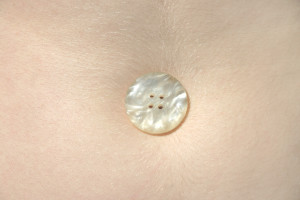 Early morning sunshine streams through the window, casting an angelic glow over my son as he toddles into the room just as I slip my arms into a button-up shirt.

He tilts his rosy-cheeked, cherubic face to the side and peers at me with twinkling blue eyes.

I stop buttoning my shirt and look at him.

“Nose,” he declares, his chubby finger stretched out towards me. “Mama nose!”

“That’s right,” I respond and give my nose a tap. “Mama’s nose is right here.”

“Nose,” I say, tapping mine again. “Can you find your nose?”

Brows furrowed, he looks me in the eye, parts the fabric on my still semi-open shirt, and points right at my stomach.

I stare at him with my mouth hanging open. Then, without breaking eye contact, he rears his finger back and gives my belly button a forceful poke.

“BOOP!” he shouts gleefully and trundles out of the room.

But then I got pregnant. While some woman maintain an innie for much of their pregnancies, my belly button popped out like a turkey timer shortly after I hit the halfway mark. After carrying what turned out to be more than 10 pounds of baby and working through a pretty gnarly case of diastasis recti, there was just no hope for the little sucker.

So now instead of an innie, I have an outie—a very “enthusiastic” one, I guess you could say. A nub, really.

And I kind of love it.

Make no mistake: it took me quite a while to get to this point. I cried big, fat tears after The Belly Button Booping Incident of ’09. I didn’t stop camouflaging my torso with layered shirts until well after my son was out of diapers. But now, several years out from the experiences of carrying and birthing a child and several years into raising him, I see my wonky belly button as a badge of honor—one of many, in fact.

Like the laugh lines around my eyes and mouth that weren’t there six-and-a-half years ago.

Like the stronger (and aching) back muscles from giving into his need to still be picked up and carried from time to time.

Like the breasts requiring a little more “assistance” to fill out tops and dresses after nourishing him in his first hours, days, weeks, and months of life.

Like the ever-growing splash of freckles on my cheeks and shoulders from hours spent outside watching him play T-ball, dig in the dirt, and climb on the jungle gym.

Like the C-section scar across my abdomen and the wrinkles across my forehead marking the work that brought him into this world and the motherly worries I bear as he finds his place in it.

My ability to get outwardly stoked about the changes brought upon my body by motherhood varies from day to day, but at my core I’m grateful for them. I carry with me physical reminders of a monumental shift in the story of my life—when “I” became “we” and our family happened.

If that means an occasional boop in the belly button from the kid that wrecked it, so be it.

(Image by Dan Zen… and that’s not my belly.)