I nurse a toddler. 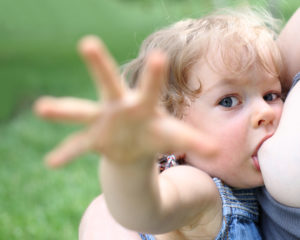 I’d like to say before I had kids I was “normal”. I went to work. I wore cute clothes. I ate at restaurants. I went out with friends. I was a pretty typical almost 30 year old. And then I had my first son.

He came flying out in the car on the way to the birth center. In the black night, with only the car lit by my husband’s (recording) iPhone, I remember my midwife placing him on my chest, telling me that the “healthiest ones come fast”. I will never forget speeding down the highway, feeling of his head caught between my underwear and legs, I was too terrified to pull him out and introduce him to this world. My midwife came running, pulled him free and placed him on my chest. We all stayed in the parking lot for a little while, laughing, crying, and processing- all coming down from the shock and disbelief of it all. We pretty much knew that night that he was going to be a special kid.

Special he is. Like first children seem to do, he’s taught me a level of love I never realized was possible and has molded me into the woman that I am today. He wasn’t an easy baby. He had colic and relfux- he came into this world screaming and he did not stop until he was nine months old. Breastfeeding was my way of stopping the madness, calming the storm, and allowing us to both rest. It was our coping mechanism.

When all of the children in our play group were weaned, my little one was still going strong. I waited and wondered when he would choose to stop. I was eight weeks pregnant on his first birthday. I assumed he would soon stop, my milk with dry up, and we’d transition peacefully into having a “toddler” and an infant.

When his brother was born seven months ago, N was a little tentative of the new relationship. I allowed him to nurse when he wanted to over the first few weeks and then began to set boundaries like all of the books said. I didn’t want to tandem nurse and I really didn’t want to nurse a toddler. I simply wasn’t one of “those women”. I cared about what people thought. People in my world didn’t nurse two babies and they definitely didn’t breastfeed two year olds.

The past seven months have been wonderful. The youngest arrived in the middle of a sunny afternoon, peacefully at home, and could not be more laid back. My toddler showed very little signs of jealousy…until this week.

The boundaries have been about the same since his brother was born. We were down to one feeding in the morning, once at nap time and once before bed- and all shorter than five minutes in length. I would remove him when I was done- and many times have to stand up and walk away while he sat and cried for more. I was teaching him about boundaries.

If he hurt himself he could have some comfort and if we were having a tough time working through a situation (normally behavior related) he would sometimes be allowed to nurse after it was resolved. I had it completely under control.

And in all honestly, I was done. Totally touched out. I had a baby that I fed on demand, that was hard enough. But determined toddlers don’t just cry when they want milk. They ask for it by name. They cry for it. They whine for it. They reach down your shirt. The reach up your shirt. They do it with clean hands, and hands that have been digging in dirt for an hour. They do it at home, and when you’re standing in line at the grocery store. Yes, I taught him what behavior was “acceptable”- but he is two. His job right now is to push the limits and boundaries.

On Friday, he went over to his sleeping brother and bit him. It was completely unprovoked and completely out of character. Once I gathered myself, wiped my frustrated mama tears away, I tried to calmly ask N what had happened. What was happening in his sweet little mind? We were all so happy as our little family of four. We had weathered the infant storm. The boys rolled around the floor together, took baths together. Why the sudden acting out?

Then, just like toddlers do, N turned everything that I thought I had under control on it’s head. “Alex more mama milk,” he said.

“Yes,” he nodded with big tears streaming down his face.

And so like you have to do sometimes at a mom, I stopped the boat and I turned it all the way back around. I sent a big middle finger to all of the books and articles I read. I said “screw it” to all of the people that I know think it’s crazy that I am still breast feeding my son and I pulled him close.

We still adhere to the same feeding “sessions” but I allow him to nurse as long as he likes. I make eye contact, I stroke his hair, I tell him that our time together is special (which I’m sure he hasn’t heard or felt since his brother was born). We have also moved the laid back baby to his crib (for at least a little while) at night and now N has some one on one mama snuggle time before he goes to his bed.

So in that one moment, things changed. I have changed. I’m nursing a toddler and I’m not going to say it and roll my eyes and act like I wish he would wean. I’m not going to push him away or get up and walk away when I know he’s headed in my direction. My son is special- he made that known on his birthday and he is his own person. My job as his mom is to love him every moment of every day and make sure he knows that his needs are valid and are accepted. He is 26 months old and still needs to nurse. He has used it as comfort since the day that he was born and he will use it until he no longer needs it. I am his mama and I know what’s best.