My Mental Health is More Important Than Breastfeeding

Breastfeeding, like so much else in the world of mothering, has often felt to me like more of a call for mothers to martyr themselves for the benefit of their babies, rather than a choice. “Breast is best” is the saying I have had hammered into my head since becoming a mom. When it comes to breastfeeding, what I want to shout from the rooftops is “mother’s mental health is best!” It doesn’t quite have the same ring to it, I know. 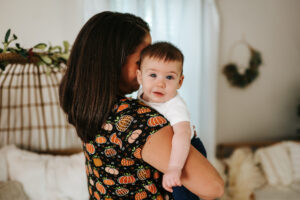 I am currently in month 17 breastfeeding my second child. When our children were born, the ONLY conversation hospital staff were having with me was how to make breastfeeding work, with little regard to how I was doing personally.

While breastfeeding was full of challenges, I overall found it to be a positive thing for me, as well as my babies. Breastfeeding helped me to feel connected to my children, allowed me to feel competent as a mom when everything felt so confusing, helped me to quickly soothe my babies, was way easier for me than preparing bottles, and overall made me happy.

I have now reached a point with our second child, where the demands breastfeeding is placing on me emotionally and physically is getting to be too much.  From the immense time commitment to feeling isolated as the only person who can calm our child at night (because all she wants to do is nurse) is overwhelming. My anxiety is on the rise, I have yet to sleep continuously through the night since her birth, and something has to give. I think I am ready to cut way back and then stop, but the guilt associated with this decision have prevented me from doing so.

I feel guilty cutting back or stopping because my daughter absolutely loves to breastfeed and is still nursing 6-8 times a day. I don’t want to cut short her time breastfeeding or deprive her. The truth is, if I were choosing what is best for my daughter, I would keep going. But if I choose my mental health I should start the process of weaning.

I realize my struggle with deciding to wean might sound trivial to moms who have struggled with breastfeeding from day one. I am incredibly lucky that it has been a positive experience until now. I know from friends, who have wanted to end breastfeeding in the first days and months, that their decision was fraught with an immense amount of guilt, judgment, stress, and loss. I don’t have to face this to nearly the same degree because I am further along in my breastfeeding journey. Whether at 17 days, 17 weeks, or 17 months though, I think this decision weighs heavily on most mothers.

When breastfeeding works well for mom and baby, it is incredible. I can personally attest to that. But I feel like it is presented to moms as a non-negotiable obligation in an already long list of demands placed on mothers. The decision to breastfeed has never felt like it takes into account what is best for us as moms. Even the most recent guidelines by the AAP that recommended moms breastfeed for the first two years, made no mention of the mother’s mental health.

As selfish and counter-mom culture as it may sound, I believe that my decision should largely be driven by what is best for me and supports my mental health.  I wish that meant breastfeeding until my baby turns two.

As I move towards weaning, the guilt still creeps up, screaming how dare you be that selfish. But I choose to silence that voice, while finding new ways to soothe, calm, connect with, and love my daughter as we face this major change together and say goodbye to breastfeeding.