Six Things I Wish I Had Known About Breastfeeding

When I had my first baby, I had no idea how much of a skill breastfeeding truly is. While I wish it had felt instinctual and easy, it was anything but that. From latches to clogged ducts, and knowing when to feed, breastfeeding felt like learning to fly by being put in a plane alone and being told to “figure it out”. Here are six things I wish I had known to make my journey with breastfeeding a little easier to navigate. 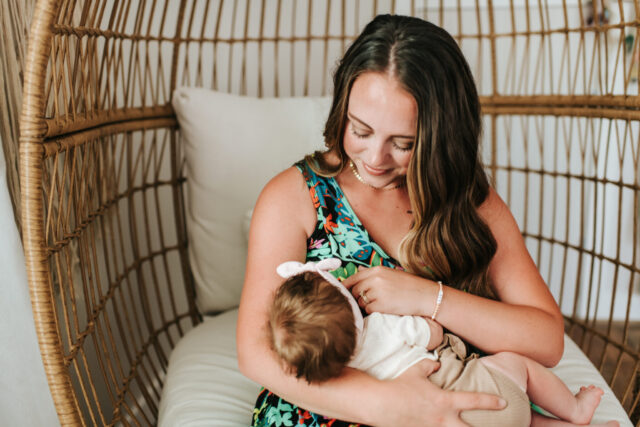 Make sure you are draining each breast of milk.

When I first started feeding my daughter, I would do a few minutes on one breast, then put her on the other one, and keep switching back and forth. The result was that my baby did not nurse long enough on each side and had an imbalance of foremilk vs hindmilk, giving her painful gas. Additionally, my breasts were becoming engorged easily.

While how much and how often you need to feed on each side VARIES WIDELY from person to person, I found that I personally needed to let my baby nurse for 15 – 20 minutes on one side before switching. Usually, nursing on one side filled her up and she rarely fed from both breasts in one nursing session. Her gas quickly disappeared, and my breasts felt better.

Find a system to track which breast your baby needs to feed on.

Many nights I found myself sitting in the dark with a screaming baby, trying to remember which breast she needed to feed on while feeling so groggy and sleep-deprived, I could hardly sit up. You might think who cares which side they feed on, but as many moms can tell you if you miss a feed or two on a breast, you might soon find yourself painfully engorged.

What worked for me was to have a small bracelet or hair tie which I would put on the wrist of the side that I needed to feed her on next (but of course I still had to remember to move it each time – which was a challenge all its own).

Scan for lumps or sore spots.

I learned early on from other mothers to take seriously any lumps that were sore or not going away. Usually, they were the start of a plugged duct (which can lead to mastitis). Whenever I noticed one I would immediately get to work removing it. What I found most effective was to:

Avoid underwires or tight bras in the first few weeks or even months of breastfeeding.

For me, a more fitted or tight bra always resulted in sore breasts or painful lumps for the first 12 weeks of breastfeeding. I soon learned I could only wear loose cloth nursing bras or shirts with a shelf bra built in. Painful lumps and sore breasts are almost non-existent when I wear no bra or very loose, unstructured bras. If you want to still have a little shape or support while not wearing a bra, what I find works great is to have removable cups that easily slide in and out of a loose cloth bra.

Be prepared for the possibility of a lot of leaking.

Your breasts may never leak at all, but for me, leaking was an around-the-clock challenge for nearly four months. I was caught off guard by this, as I found myself constantly washing my minimal (and insufficient as it turns out) supply of 4 reusable breast pads.  I had no idea you could have a let-down of milk when the baby wasn’t nursing or that as the baby feeds, the breast they are not nursing from, can release A LOT of milk.

After many soaked t-shirts, I went ahead and invested in a large arsenal of breast pads which I stashed in every bathroom in the house, as well as my purse, my car, and our diaper bag. After several weeks, I thought the leaking might never get better, but finally, at around 4 months, I found I only had to wear them at night. By 8 months, I didn’t need them at all. But it was a nuisance I was not prepared for.

When your baby gets too upset to latch, try a pacifier.

I was surprised to find that my baby, who was normally a nursing pro, could get too upset to latch. This of course made her more upset, and things would spiral downward. The lifesaving trick I got from another mom was to first give my baby a pacifier (easier for her to latch on to) to help calm her down and get her suckling, and to then pull it out and switch my baby onto the breast. This trick has saved me on many occasions.

Ultimately, breastfeeding is a “learn on the job” experience, and it simply involves a lot of trial and error. Remember to laugh over spilled milk and give yourself grace as you learn this new skill.