Breastfeeding on Demand – Am I Spoiling My Baby?

“Is she eating again?” “She will be too attached.” “You know, you really should put her on a schedule.” “She won’t know how to self-soothe.” These are just a few of the many comments I got in those first few weeks of motherhood when family and friends saw me breastfeed my new daughter on demand. My favorite comment was, “She will become addicted”. To my boob? Okay, sure. 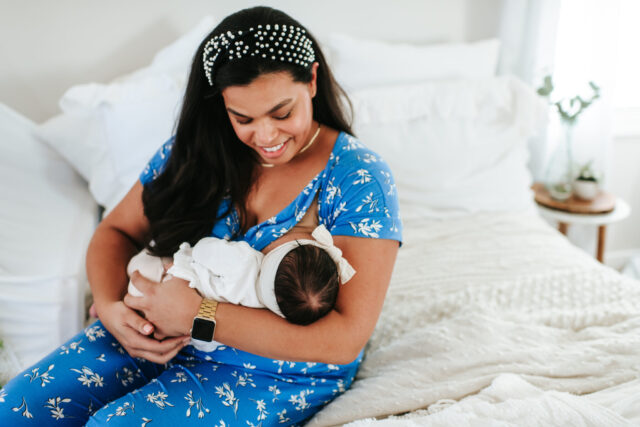 There’s no doubt, breastfeeding on demand goes against a lot of popular wisdom and parenting philosophies.

What do I mean by breastfeeding on demand? I didn’t worry about a schedule. I fed her whenever she wanted. I fed her at the slightest feeding cue, when she got upset, and yes, even to put her to sleep (gasp!). Sometimes it would be 3 hours between feedings, and other times just 15 minutes. I offered the breast both to feed and comfort her. I didn’t count the hours since her last feed or focus on regular intervals between feeds. Rather, I chose to just observe and respond. On average, I fed her 10-14 times a day in those early weeks, and sometimes closer to 20 (don’t worry new moms, that was not the norm).

For me, feeding on demand laid the groundwork for a successful breastfeeding relationship with my child. It had a lot of benefits, including:

Now onto the big questions. Did breastfeeding on demand spoil my child? Was she hard to wean as a result? Did she fail to learn important self-soothing skills? Did she develop an unhealthy relationship with eating? No.

She sought independence from me early and was comfortable testing her limits. She naturally grew out of constantly wanting to suckle and settled into a schedule of her own. She easily learned how to put herself back to sleep. She found other methods of comfort and soothing as she got older. At 17 months, weaning her was a breeze.

Is this the only way to approach breastfeeding? Of course not. There are a lot of other paths to breastfeeding success. But breastfeeding on demand worked great for me. In those early days, it would have been helpful to have someone reassure me that I wasn’t raising some milk-addicted monster who would be too attached to explore their independence one day.

As the book, The Womanly Art of Breastfeeding says, “meeting their needs gives them a totally reliable base from which to begin to explore and make sense of the world” and that is absolutely what I found to be true as I breastfed on demand.