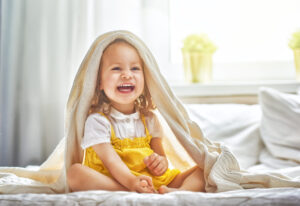 Sometimes at the end of a weekend, my husband and I will sit down after the children are finally in bed and simply stare at each other in profound exhaustion and confusion.

“How can they be so tiring?” one of us will ask, and the other will shake their head mutely.

“I don’t know. It’s just — they’re so little, how? How is it possible they take a whole day up just by doing nothing and yet I feel like I ran a marathon?”

How are little children so boring and exhausting at the same time? It’s not as though watching them play is hard — well, except for the constant mental calculus of asking ourselves, are they about to hurt themselves, are they actively hurting themselves, are they about to jump off the couch, are they going to take those crayons and suddenly run pell-mell towards the wall out of nowhere, are they going to run towards the gate at the park if I let go of this little hand even for an instant, the gate is a good lap away, but if they started running right this second, would I be able to catch them in time, I hear silence coming from the living room, but both children are in there, what kind of horrific scene am I about to come back to from making myself a cup of tea?

It is always, always, always something. It is as though children are born on, and for the next five years, it’s a game of ping-pong to trade who is watching the “on” person. Even when they’re put to bed, it’s no promise that they aren’t going to ping right back downstairs to ask for more hugs, to say they’ve lost their toy bunny, their stuffed moose, they need a cup of water, they’re afraid of the dark now, anything and everything will be thrown at the wall to see if it sticks.

It is exhausting because it is relentless.  And when you have a second child, the clock winds backwards and there you are, right back at the beginning again.

It can feel like a terribly frustrating hamster wheel, if you let it.

For my sanity. For my marriage. For my patience.

It doesn’t make it easier, but it does offer some perspective when I feel on the verge of collapse.

Survival, survival, survival. This isn’t about doing every stellar parent enrichment activity possible every weekend, or baking big pancake breakfasts, or teaching my child to be a cello prodigy. This, right now, is about keeping us safe, upright, and surviving.

You can do it.

(And also, this is your permission to take a nap on a weekend.)