Are We Still Debating This? -Breastfeeding in Public 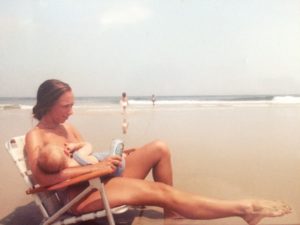 I have been breast-conscious my entire life. Puberty came to me around age 12 when I started menstruating, my breasts started to develop, and my body was morphing into something unrecognizable to me, I was not prepared for the changes that were happening. My mother, who was kind and loving, parented with what I call benign neglect. I knew she loved me and she made sure my basics needs were met but to be honest, I believe she was overwhelmed as I was number 6 of 7 (when I was born the oldest was 7!) and many things were overlooked or not dealt with that I may have needed emotionally. So as my breasts enlarged, she never noticed and in my adolescent discomfort and embarrassment, I did not know how to ask her for what I needed, which in this case was a bra. So I went to school each day trying to hide my chest from the world, most specifically from boys who were starting to notice and from the girls (who were supposed to be friends) who made unkind remarks about my “boobs”. I was mortified and became ashamed of my body for betraying me and angry at my mother for what I perceived as her fault for putting me in the pathway of emotional harm. As the years went by I grappled with discomfort around the size and shape of my body. I saw my breasts as huge and my body as fat; I hid in baggy clothes to hide my shape. I look at pictures of myself from those years and I think neither was true, my breasts though not tiny, they were not the boulders I envisioned and my body was for the most part slim to average with occasional times of increased weight gain.

When I became pregnant with my first child, my body of course went through the most major transformation since puberty and for the first time I was ok with it…not only ok, but comfortable with the changes. Pregnancy felt liberating from the stress I had carried all of those years…my body was doing something miraculous and I could be ok with that. I was able to give birth to my daughter unmedicated and my respect for my body, which was virtually non-existent, grew. After her birth, I clearly remember sitting on my bed and nursing her and having this incredible feeling of elation. I realized at that moment what my breasts were truly for; they were to nourish and to grow my baby outside of my body as it had been doing so perfectly all those months prior.

But the culture did not seem to share the same perspective as me. When she was born we lived near the beach in Florida and I began to take her to the ocean when she was just a few months old and of course when needed, I would feed her. I would pull my breast out as discreetly as I could from my bathing suit and get her latched as she lay across my body making my breast fairly invisible. You’d really have to stop and look to realize she was nursing (isn’t it interesting that even our choice of the word nursing seems to want to disguise that it is breast related?) not just sleeping in my arms. I believed even if it were noticeable, I was on a beach with scantily clad people of all sizes and shapes, there were a lot more breasts exposed in the suits then there were from my nursing baby and I thought, “Who would care?” Therefore I was dumbfounded, confused and old feelings of shame were triggered when I would get a dirty stare or remark from someone who would say that it was not appropriate for me to doing “that” in public. It of course was not just on the beach, I had these encounters in restaurants, in stores, in parks and even in a “friend’s” home who asked me, “What will my son think? “ and “That’s disgusting!” from another neighborhood mom at our sons’ basketball practice.

Fortunately for me, for my baby, I did not allow the shame to overpower me, shut me down or prevent me from breastfeeding wherever we were at the time. I knew that what I was doing was right and that it was everyone else’s problem if they were uncomfortable. I knew that the discomfort was based on lack of exposure to breastfeeding in the daily lives of most and definitely the sexualization of women’s bodies that is deeply embedded in our cultural message. I felt like every time I breastfed my baby in public, I was not only educating others, I was giving those who wanted to breastfeed permission to nurse wherever they chose and however they chose, exposed or covered. The act of breastfeeding felt very political, an act of civil disobedience, a social justice issue for me. I ended up breastfeeding 6 children for a total of 15 years and though I encountered negative moments, I would like to believe that it had an impact for the positive for at least one or more person out there.

So please continue to breastfeed in public, please post your photos, your videos, have more “latch-on” events. Give comfort and support when you see someone breastfeeding by just smiling and if appropriate, tell them you are so glad that they are. I have not breastfed a baby since 1994; it is incomprehensible to me that this is still an issue. It is long overdue for our culture, for all genders to understand that though the breasts can be sexual, their existence on a person’s body is to feed, sustain and comfort another human being, a baby. This is a human right, it is a civil right.